A synopsis of our reality as first time parents

This post will probably summarize many of my struggles withing the last 6 months.  It is a post written for Hobo Momma at Natral Parents network Carnival of Natrual Parenting.  For those IF folks that still follow my blog, it would be similar to Mel's ICLW. 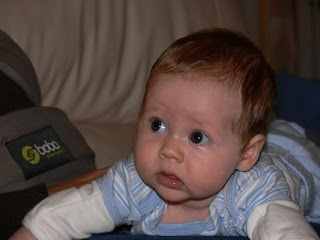 As a mother who struggled with loss and infertility, I can honestly say parenting and what type of parents my husband and I would become, wasn't on my radar.  When we decided we were ready and willing to try to get pregnant, we were caught up in the 'fun' and 'excitement' of trying. We wanted a baby.  A snuggly baby to hold and to nurse. We knew that we would breast feed (or I would breast feed) and we would practice gentle discipline - we don't hit our dogs...we definitely wouldn't spank our children.  However, how parenting would look and the work involved wasn't something we really thought of.  As months passed with no positive pregnancy test, the fun and excitement turned to worry. We (correction I) was starting to become concerned about our lack of success and with spotting for days before Aunt Flow's arrival and Dr. Google, I realized we may be dealing with more than bad timing.  I requested an appointment with a specialist and we started the road of testing. However, a year after trying, just after our consultation meeting we were blessed with our first BFP! This excitement was met with reservation as I was terrified of loosing the baby.  This fear must have been mother's intuition as we found out at our 12 week ultrasound that the fetus had died at 9 weeks.  Devastated we took a few months off from trying and when we were going to resume testing, we found out we were pregnant again.  Only this time, the fetus didn't even form.  At 6 weeks we were diagnosed with a blighted ovum and once again had to deal with the reality of loosing another baby.

When we conceived our now daughter, I was cautiously optimistic.  Our fertility testing showed I was having premature ovarian failure and my egg quality was low.  However, with a diet change and new supplements (didn't need to take fertility drugs) we were able to conceive on our own and at 9 weeks had a very positive ultrasound.  Our pregnancy was uneventful - but I was watched like a hawk and had to go through monthly ultrasounds.  During the 41 weeks I was pregnant, I was scared and anxious every step of the way.  We did the things normal couples do, paint the nursery, buy furniture register for the shower - but the entire time I was jaded.  I just couldn't let myself believe that this was happening.  I was so focused on the pregnancy, my hubby and I didn't really take time to think about what being a parent was all about.

There were a few things that we had thought would happen that showed how naive we were.  We bought a crib and an organic crib mattress thinking our baby would be spending most of his or her days in there.  We had a play-pen set-up downstairs so when we were downstairs he/she would nap in the play-pen.  We had a bassinet for our room and a nursing chair.  I knew beast feeding was the only option for us, and we had been gifted a set of cloth diapers as we wanted to cloth diaper.  Going into parenthood, we had discussed CIO - and I wasn't going to let my baby cry...but I didn't really think what the alternate would be.  I was niave.  I thought I would nurse my baby to sleep and she would lay down and sleep blissfully for 4 hour blocks.

I wasn't anticipating the following:

- a baby who would (and almost 7 months later) LOVE to pacify / comfort nurse around the clock.  At the beginning I took this behaviour or her always being hungry...

- a baby who wouldn't fall asleep nursing after 4 weeks of age.  She ended up (and continues) to ONLY sleep during the day if worn in the ergo and gently bounced on an exercise ball.

- a baby who would stop sleeping large chunks at night at 4 months of age and we would resort to co-sleeping and all night nursing so that I would get any sleep.

As a first time mom, I was convinced I was screwing things up.  I thought for sure I was setting my daughter up for bad habits.  I cried.  I was depressed.  I was incredibly anxious. I started thinking we needed to sleep train her and let her cry so that she would  break herself of these habits. However, the more I thought about letting her cry, the more anxious I would become.  It wasn't until I started meeting other like minded moms, I realized that my baby wasn't broken - she was normal.  I read the Dr Sears High Needs baby article and realized my daughter fit this description. I attended La Leche League meetings and got support and realized that CIO can lead to more problems down the road - especially for a daughter like I had.

Its funny how a few key elements shape how you parent.  For us, breast feeding really paved the way to a more natural parenting road.  I fundamentally believe in breast feeding and even though things started out rough, by keeping with it and understanding what mothering through breast feeding means, I became more of an advocate for other means of parenting.   We will not allow our daughter to CIO.  We are huge advocates for bed sharing (if you do it safely) and swear by baby-wearing.  Now at 7 months, we are much more confident and comfortable in our parenting choices than we were even 2 months ago.  Through living and learning and meeting our daughter's needs, she is showing us how to become parents and has forced us to throw all expectations out the window.  We have lost friendships and have become distant to certain family members who do not share our same views.  That's okay - we believe in what we are doing.
> ***

Visit Code Name: Mama and Hobo Mama to find out how you can participate in the next Carnival of Natural Parenting!
Please take time to read the submissions by the other carnival participants (posts will be live and updated no later than afternoon on June 11):

Amanda
30 years old married to my best friend.Parenting our first baby after two losses and struggling with being able to get pregnant.

Click here to submit my news to the LFCA